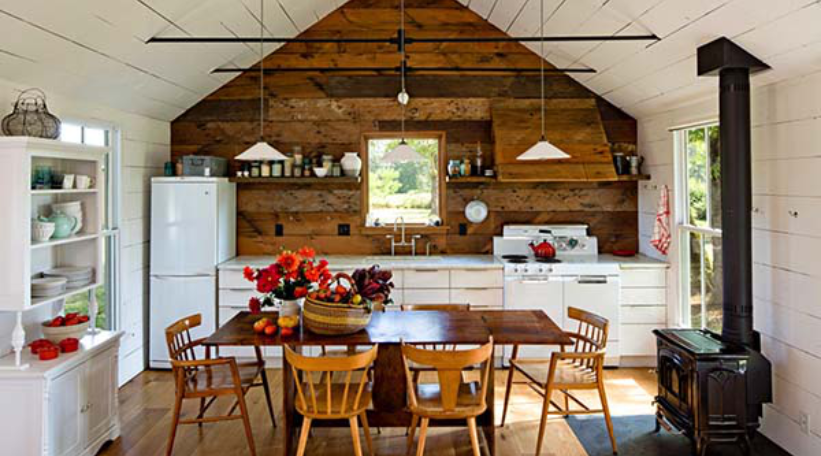 By Diane Franklin and Tammy Adamson-McMullen

It seems that the world has gone mad for mid-century modern styling. It’s everywhere—in both residential and commercial spaces—and increasingly is the focus of many home furnishing stores, flea and antique markets, decorating blogs, local home shows, shelter magazines…you name it!

But what if mid-century modern isn’t your thing? What if you want to update your décor but aren’t crazy about pared-down furnishings, space-age light fixtures and brassy metallics? Take heart, because there are other on-trend styles out there! Country chic, Bohemian, contemporary, Scandinavian and transitional are just a few of the styles giving mid-century modern a run for its money. A couple of these styles have picked up steam in the last couple of years, but a few are timeless. Here are trademarks of each look.

Country chic styling has picked up dramatically, thanks to shows like “Fixer Upper” and the trend for recycling and repurposing—which take traditional items and use them in new ways. A rusty old gas can, for example, might be used as the shade for a kitchen pendant light, or an old quilt might be used to reupholster a chair.

Trademarks of country chic include slightly distressed furnishings, whitewashed woods, cheerful fabrics, lots of florals, vintage collectibles, overstuffed cushions and old metals. The key to putting these items together is balance; no single item should dominate the others in a space. The colors you choose also need to be balanced. In general, country chic color palettes are soft and pleasing to the eye and include dusty blues, sage greens, creamy whites, light grays and pops of yellow. Tip: For an on-trend country look, combine white walls with gray trim and doors.

Bohemian décor—also referred to as BoHo—is a versatile, artistic and often unconventional decorating style that is characterized by the bold use of pattern and generous use of fabric. While the BoHo look is often high-end, it also can be successfully duplicated at a mid-market price point. The fabric is often light and flowy, though heavier textiles also play a role in such usage as upholstery, accent pillows, and area rugs.

A variety of ethnic influences, ranging from Moroccan to Indian to Turkish to American Southwest, are featured in the BoHo Chic style. You’ll see such pattern choices as wide stripes, geometrics, tribal designs, and florals.  The color pairings will be bold and daring with dramatic contrasts.

Contemporary is a style that never goes away because it is always changing. Unlike modern, which refers to a specific period in time in the last century, contemporary styling deals with the present. So the home furnishings that are popular today are the ones that you can safely choose from to create a contemporary space.

Contemporary looks tend to be clean and sleek, but they are not minimalistic. In fact, contemporary styling likes curves! While mid-century modern is very linear, contemporary isn’t afraid to have S-curve sofas, barrel chairs, curly-cue lighting fixtures and swirly wallpaper patterns. Current contemporary styling also enjoys a bit of luxury, such as velvety throws and mirrored furniture pieces, as well as bright accents, colorful accent walls (created with paint or wallpaper) and bright, shiny metallics. The other contemporary trademark is personalization. So feel free to add your own touch of whimsy to this style!

Scandinavian design combines the livability of the country chic look with the functionality of mid-century modern styling. But don’t confuse Scandinavian with either of those styles. Scandinavian design is distinctly simple, bright and airy, which isn’t surprising when you consider the dark winters prevalent in Nordic countries.

In general, Scandinavian styling is characterized by light and warm woods—such as beach, ash or oak—used in floors, trim and beams; white or muted color schemes; clean lines; and understated furnishings, used sparingly. Monochromatic color schemes are especially popular in Scandinavian design. It’s not unusual to see a completely white-on-white space punctuated only by warm woods. Note: If you like unfussy decorating, this style is for you!

Transitional decorating combines elements of traditional and contemporary design. Often the patterns and furniture stylings are traditional, but contemporary colorways will give them a new and modern sensibility. Color choices are usually very clean, ranging from neutrals to brights. Furniture may have traditional curves, but frequently the materials are more modern, with such choices as glass, rattan, steel, and metal being part of the décor.  A minimalistic approach to accessories and fabrics is another characteristic of the transitional style.

Transitional has gained in popularity over the past decade. With a transitional style, there is more emphasis on personality and personal expression, and ultimately, isn’t that what decorating is all about?